he Ballad of Songbirds and Snakes will revisit the world of Panem sixty-four years before the events of The Hunger Games, starting on the morning of the reaping of the Tenth Hunger Games.

What Amazon readers have to say…

A fond, funny Southern-fried memoir about growing up a proper young lady…or not.

How does a North Carolina native go from being a tomboy with catfish guts on her overalls to becoming the next Scarlett O’Hara? Turns out, it’s not so easy. Too smart, too tall, too fat, too different…Anna Fields was a dud at debbing.

From tea parties to teased hair to where to hide mini bottles of liquor inside poufy crinoline ballgowns, Anna reveals all-in a hilarious, behindthe-scenes glimpse into Deb Culture, where for a Southern belle, “the proof is in the pouf.”

Unless, of course, she rebels…
Penguin Books More Info From roasted babies to vanishing hitchhikers to housewives in football helmets, this exhaustive and highly readable encyclopedia provides descriptions of hundreds of individual legends and their variations, examines legend themes, and explains scholarly approaches to the genre. Revised and expanded to include updated versions of the entries from the award-winning first edition, this work provides additional entries on a wide range of new topics that include terrorism, recent political events, and Hurricane Katrina.
Entries in Encyclopedia of Urban Legends, Updated and Expanded Edition discuss the presence of urban legends in comic books, literature, film, music, and many other areas of popular culture, as well as the existence of “too good to be true” stories in Argentina, China, Italy, Japan, Mexico, and several other countries. Serving as both an anthology of stories as well as a reference work, this encyclopedia will serve as a valuable resource for students and a source book for journalists, professional folklorists, and others who are researching or interested in urban legends.
ABC-CLIO More Info

Ray Liu knows he should be happy. He lives in a big suburban house with all the latest electronic gadgets, and even finds plenty of time to indulge in his love of gaming. He needs the escape. It’s tough getting grades that will please his army veteran father, when speaking English is still a struggle. And he can’t quite connect with his peers at high school — Chinese immigrants like himself but who seem to have adjusted to North American life more easily.

Then comes the fateful day when his father accesses Ray’s internet account, and discovers Ray has been cruising gay websites. Before Ray knows what has hit him, his belongings have been thrown on the front lawn, and he has been kicked out.

Angry,defiant, Ray heads to downtown Toronto. In short order he is robbed, beaten up and seduced, and he learns the hard realities of life on the street. Could he really sell himself for sex? Lots of people use their bodies to make money — athletes, actors, models, pop singers. If no one gets hurt, why should anyone care?

At first Curtis isn’t that worried when his mother doesn’t come home from her all-night job at the local gas bar. She’ll be back, he’s ten out of ten positive. After all, she promised she would never leave him again.

Besides, Curtis is used to looking after himself and his five-year-old brother, Artie, and for a time he manages things on his own, keeping their mother’s absence a secret. He knows exactly what will happen if any of the teachers find out the truth. He remembers his last horrible foster home all too clearly.

Curtis gets pretty good at forging his mother’s signature, but when the credit card maxes out and the landlord starts pressuring for the rent, it’s more than a twelve-year-old can handle. Just in time, Curtis and Artie make friends with Mrs. Burt, the cranky, lonely old lady who lives across the street. And when the authorities start to investigate, the boys agree to go with Mrs. Burt to her remote cabin by the lake, and the three of them abscond in her 1957 Chevy Bel Air.

At the lake, the boys’ days are filled with wood-chopping, outhouse-building, fishing, swimming and Mrs. Burt’s wonderful cooking. But as the summer sails by, Curtis can’t stop thinking about his mother’s promise.

Then the weather grows colder, and Mrs. Burt seems to be preparing to spend the winter at the cabin, and Curtis starts to worry.

Have they really all just absconded to the lake for a summer holiday? Or have the two boys been kidnapped?

Set in Vancouver and the B.C. wilderness (the trip to the cabin involves a hilarious white-knuckled road trip through Hope), this is a book that reflects Caroline Adderson’s many writerly strengths — her “wit and a facility for dialogue, good pacing and a brisk, clean prose style” (Globe and Mail), her “close observation of telling details” (Quill & Quire) and her ability to “celebrate a child’s imagination in a realistically humorous way”. When Washington, D.C.’s National Counterterrorism Center is struck by a series of devastating explosions, the results are catastrophic—185 killed, including public officials and CIA employees. Such an act of extreme violence calls for extreme measures—and elite counterterrorism operative Mitch Rapp, joining forces with trusted team member Mike Nash, finds himself in the frustrating position of having to illustrate the realities of national security to government officials up in arms over the agents who rushed in to save countless American lives. Meanwhile, with three al Qaeda terrorists still at large and Nash traumatized by the horrors he witnessed during the attack, Rapp must help his friend while threading his way through the naysayers on Capitol Hill—and silently, swiftly, do what he must for the sake of his country and the pursuit of honor.
Pocket Books More Info

In the spring of 1943, during a stint in the Merchant Marine, twenty-one-year old Jack Kerouac set out to write his first novel. Working diligently day and night to complete it by hand, he titled it The Sea Is My Brother. Now, nearly seventy years later, its long-awaited publication provides fascinating details and insight into the early life and development of an American literary icon.Written seven years before The Town and The Cityofficially launched his writing career, The Sea Is My Brother marks a pivotal point in which Kerouac began laying the foundations for his pioneering method and signature style. A clear precursor to such landmark works as On the Road, The Dharma Bums, and Visions of Cody, it is an important formative work that bears all the hallmarks of classic Kerouac: the search for spiritual meaning in a materialistic world, spontaneous travel as the true road to freedom, late nights in bars and apartments engaged in intense conversation, the desperate urge to escape from society, and the strange, terrible beauty of loneliness.
Da Capo Press
Editor’s note:  We get lots of advance reading copies and do enjoy getting them and reporting on them. But we rarely get one from such a famous author like Kerouac from the early part of his life.  If you have read any of Kerouac’s books you will enjoy this one. If you have not ever read any of Keruac’s books, then this is a good start.

Jeannette Walls grew up with parents whose ideals and stubborn nonconformity were both their curse and their salvation. Rex and Rose Mary Walls had four children. In the beginning, they lived like nomads, moving among Southwest desert towns, camping in the mountains. Rex was a charismatic, brilliant man who, when sober, captured his children’s imagination, teaching them physics, geology, and above all, how to embrace life fearlessly. Rose Mary, who painted and wrote and couldn’t stand the responsibility of providing for her family, called herself an “excitement addict.” Cooking a meal that would be consumed in fifteen minutes had no appeal when she could make a painting that might last forever It is a truly special story and we don’t want to spoil it.

Nevertheless, you need to know something, so we will just say this:

It is extremely funny, but the African beach scene is horrific.

The story starts there, but the book doesn’t.

And it’s what happens afterward that is most important.

Once you have read it, you’ll want to tell everyone about it. When you do, please don’t tell them what happens either. The magic is in how it unfolds. For years, Jack Ryan, Jr., and his colleagues at the Campus have waged an unofficial and highly effective campaign against the terrorists who threaten Western civilization. The most dangerous of these is the Emir. This sadistic killer has masterminded the most vicious attacks on the West and has eluded capture by the world’s law enforcement agencies.
Now the Campus is on his trail. Joined by their latest recruits, John Clark and Ding Chavez, Jack Ryan, Jr., and his cousins, Dominick and Brian Caruso, are determined to catch the Emir, and they will bring him in . . . dead or alive. 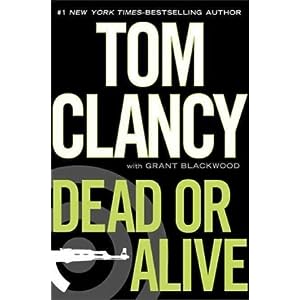