On May 18, 1860, William H. Seward, Salmon P. Chase, Edward Bates, and Abraham Lincoln waited in their hometowns for the results from the Republican National Convention in Chicago. When Lincoln emerged as the victor, his rivals were dismayed and angry. Throughout the turbulent 1850s, each had energetically sought the presidency as the conflict over slavery was leading inexorably to secession and civil war. That Lincoln succeeded was the result of a character that had been forged by life experiences that raised him above his more privileged and accomplished rivals. He won because hepossessed an extraordinary ability to put himself in the place of other men, to experience what they were feeling, to understand their motives and desires. This capacity enabled President Lincoln to bring his disgruntled opponents together, create the most unusual cabinet in history, and marshal their talents to preserve the Union and win the war.
Prince Frederick More Info

For elite military cop Jack Reacher, that somewhere was Carter Crossing, Mississippi, way back in 1997. A lonely railroad track. A crime scene. A coverup.
A young woman is dead, and solid evidence points to a soldier at a nearby military base. But that soldier has powerful friends in Washington. Reacher is ordered undercover—to find out everything he can, to control the local police, and then to vanish. Reacher is a good soldier. But when he gets to Carter Crossing, he finds layers no one saw coming, and the investigation spins out of control. The 4th of July In a late-night showdown after a near-fatal chase, San Francisco police lieutenant Lindsay Boxer has to make an instantaneous decision – and sets off a chain of events that leaves a police force disgraced and an entire city divided. As summer comes into full swing, Lindsay and her friends in the Women’s Murder Club battle for her life on two fronts: before a judge an jury as her trial comes to a climax, and facing unknown adversaries who will do anything to keep her from the truth…

The new question: Ten years after the worldwide bestseller Good to Great, Jim Collins returns to ask: Why do some companies thrive in uncertainty, even chaos, and others do not? In Great by Choice, Collins and his colleague, Morten T. Hansen, enumerate the principles for building a truly great enterprise in unpredictable, tumultuous, and fast-moving times.

New York Times bestselling master of suspense Steve Martini returns, ensnaring defense attorney Paul Madriani in a web of terror and death being spun in the shadows of America’s most sacred and secretive institution—the Supreme Court.

Winner of the 1982 National Book Award for Biography, Mornings on Horseback is the brilliant biography of the young Theodore Roosevelt. Hailed as a masterpiece by Newsday, it is the story of a remarkable little boy — seriously handicapped by recurrent and nearly fatal attacks of asthma — and his struggle to manhood. Simon & Schuster Audio
More info on Mornings On Horseback: The Story of an Extraordinary Family, a Vanished Way of Life, and the Unique Child Who Became Theodore Roosevelt

Integrity—more than simple honesty, it’s the key to success. A person with integrity has the ability to pull everything together, to make it all happen no matter how challenging the circumstances. Drawing on experiences from his work, Dr. Henry Cloud, a clinical psychologist, leadership coach, corporate consultant and nationally syndicated radio host, shows how our character can keep us from achieving all we want to (or could) be.

In The Rest of Her Life, Laura Moriarty delivers a luminous, compassionate, and provocative look at how mothers and daughters with the best intentions can be blind to the harm they do to one another.

HarperAudio
More info on The Rest of Her Life CD

Once Judge Atlee was a powerful figure in Clanton, Mississippi–a pillar of the community who towered over local law and politics for forty years. Now the judge is a shadow of his former self, a sick, lonely old man who has withdrawn to his sprawling ancestral home. 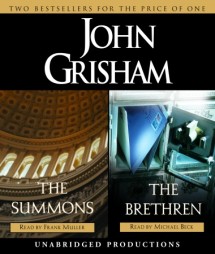 Random House Audio
More info on The Summons / The Brethren